* In case of any delay in receiving the OTP, you may verify it later. Please proceed without verification.

Enter your City name or Pincode

Lakhanpur is a town that belongs to Kathua district of Jammu and Kashmir. It is sited at a distance of 6 km away from its district Headquarters Lakhanpur and 341 km away from state capital Srinagar. The town is located on the border of its neighbouring Punjab district which forms the town as an entrance of its state from Punjab. Since the town forms the state entrance it has few toll gates which earn a lot of income for Jammu and Kashmir. The town exactly from the Modhopur Ravi Bridge and it also lies very close to the banks of River Ravi. Lakhanpur is one of the very less populated towns in Jammu and Kashmir but well developed in its infrastructure. Dogri, Urdu, Hindi and English are the most spoken language of the town. The town is also very popular for Durga Mandhir. 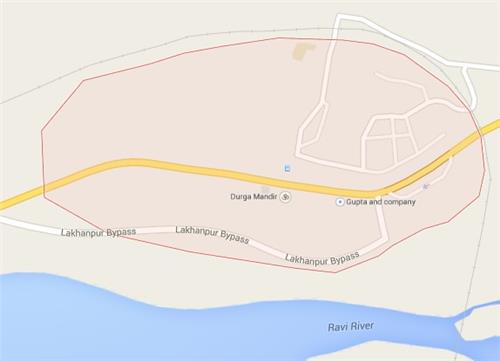 Lakhanpur is elevated at a height of 396 m above sea level and it has its coordinates at 32.410561° North latitude and 75.614403° East longitude. River Ravi flows towards the South of the town. The town is sited on the foothills of Sivalik Mountain towards its East. Lakhanpur is bounded by Chak Lachhman and Maroli in the North, Rakh Jahfar in the East, Jagat Pur and Chak Gota in the South and Chak Luden in the West. River Magar Nala flows very close to the town towards its North West. The town is very close to the borders of Gurdaspur district towards its East.

As per 2011 census the town has a total population of 3461 out of which male constitutes 2250 and female constitutes 1211. The town comprises of 618 houses. The density of population in Lakhanpur is 4777 person in inch per sq km in an area of about 0.74 sq km. The population growth in Lakhanpur is recorded as + 8.04 % per year since the last census of 2001. The town has a total number of 356 children between the age group of 0 to 6 years which is nearly 10.29 % of the total Lakhanpur population.

The total number of literates in the town is recorded as 2877 i.e. 92.66 % of the total town population which is very much higher than the average Jammu and Kashmir literacy rate of 67.16 %. Out of which male literates constitute 1946 i.e. 95.35 % and female literates constitute 931 i.e. 87.50 %. Out of the total town population nearly 584 people are recorded as illiterates.

The total number of people employed in the town is recorded as 1698 out of which male constitutes 1578 and female constitutes 120. Out of the total working population nearly 96.35 % are engaged in main work and the rest of 3.65 % are engaged in marginal work. Out of the total town population nearly 3.61 % of people belong to Schedule Caste and 3.12 % of people belong to Schedule Tribe.

Lakhanpur constitutes a municipal committee or a notifies area committee which comprises of 7 wards for which elections are held once in 5 years and 7 ward members are elected to form a local self-government in Lakhanpur. Lakhanpur comes under Kathua Tehsil of its district and the town operates under Jammu administrative division of its state.

Lakhanpur being the gateway of Jammu and Kashmir form Punjab is very strong in its transport system. The national highway NH 1A or NH 44 (new number) runs through the town from its East to West. The NH 1A which connects Punjab with Jammu and Kashmir links Lakhanpur with major cities like Jalandhar, Srinagar, Pathankot and Uri. Petrol Pumps, restaurants, ATMs are sited on the NH 1A apart from toll plazas. The neighbouring localities that NH 1A connects Lakhanpur are Rakh Jahfar, Madhopur, Bheri Bazurg, Ferozepur Kalan, Gazi Barwan and many more. NH 1A is the busiest roadways in Kathua district and traffic is the big concern in travelling in this route exactly towards Punjab to Lakhanpur entrance.

The Jammu & Kashmir bank and the Punjab National bank operates in the town which offers beneficial schemes for its customers.

The Bharat petrol pump in the town provides fuel for the vehicles running through Lakhanpur.

Comments / Discussion Board - About Lakhanpur